Amina Allute from the village Mvae in rural Tanzania used to travel miles each day to fetch water with her children. It took hours. Today, she is excited that water is now located close by with a tap right near her home, allowing her to prepare food when it is needed and grow her own vegetable garden for extra income.

This transformation in Amina’s life – and so many others in her community – was made possible by the Water and Development Alliance Entrepreneurship for Resilient Village Water Systems in Tanzania Project (WADA), led by The Ohio State University College of Engineering’s Global Water Institute (GWI). As the $2 million-plus project nears completion, the team is hearing back from the people whose lives have been impacted by this transformative project.

Before the project, the water source in Amina’s village was not easily accessible by most of the community members, located far away from the village center, the primary school, and the health clinic. The old, piped water system was run by a diesel-powered mono pump that had stopped working years ago. The community struggled to get clean and safe water. Primarily women, sometimes with their children, were tasked to gather water in swamps and shallow wells, exposing them to water-borne diseases. 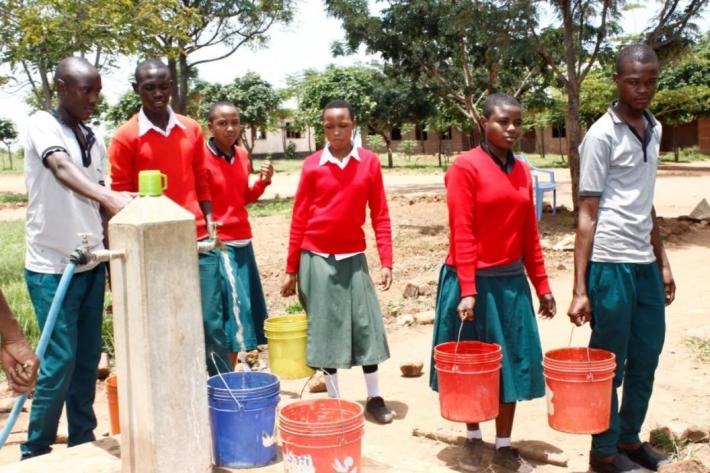 Mwasauya Secondary school students carrying water from the distribution point constructed at the school compound to the toilets for sanitation and hygiene.

In Tanzania 27 million people lack access to clean water – approximately one in two residents. There are an estimated 46,000 failed rural water points, with 20% not functional within one year of construction due to a lack of community buy-in, low community management capacity or insufficient funds for maintenance. Historically, donor-funded projects have added to the problem by using short-term success metrics, like number of wells installed, rather than long-term operational outcomes. Clean water scarcity negatively affects every aspect of human potential beginning with health and nutrition – 51% of children under age 5 in rural Tanzania are stunted due to chronic malnutrition – and extending to educational achievements and economic prosperity.

The WADA project team upgraded or installed solar-powered water systems in 13 Tanzanian rural villages. Each water system includes a suite of sensors that can be monitored remotely to measure operational status, water flow, and aquifer replenishment rates. New pipes carry the water from the wellhead to strategically located taps throughout each village, including schools and clinics. The distribution networks are a departure from traditional water projects that typically only drill a well. With water access delivered where it is needed in the community, project impacts are magnified, enabling villages to achieve their development and wellness goals. 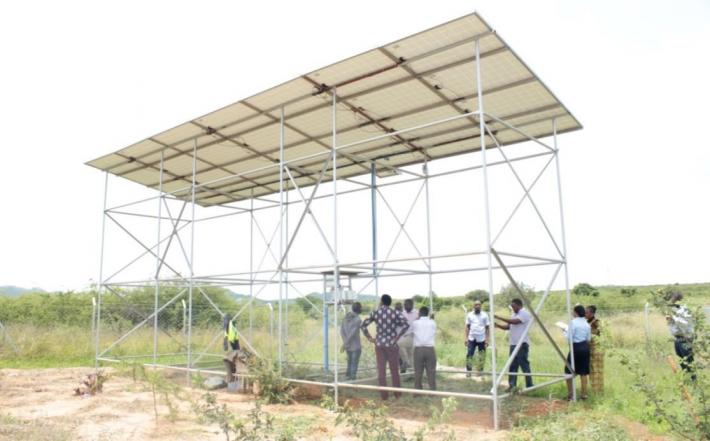 The new solar powered water system in the village of Nghongonha.

In the village of Mdilu, water was piped to the Mwasauya Secondary School, where officials also were able to leverage other resources to build an eight-stall toilet and sanitation and hygiene area to serve the teenage male and female students. Before the project, each student had to carry a jerry can from home with them to occasionally fetch water nearly three kilometers away during class hours. As a result, the headmaster said this encouraged unwanted behaviors and practices like truancy, drop outs, poor performance, and poor sanitation and hygiene.

“Without the water from this project we would have incurred very high costs for buying water on the oxen carts from the village center, far away from the school,” said Headmaster Adam Mwakalinga. “We are so grateful to all who have given us this clean and safe water, the development partners, the government of Tanzania and all stakeholders for bringing this project to our community.”

In addition to the new infrastructure, the WADA team provided training in water systems management and maintenance to village leadership and water committees. The project also invested in the technical knowledge of Tanzania’s workforce through a partnership with the University of Dodoma (UDOM) where a training and demonstration facility was installed. In collaboration with UDOM faculty and staff, Associate Professor Audrey Sawyer of Ohio State’s School of Earth Sciences provided curriculum and training on maintenance of water systems, hydrology, and water resources planning and management. GWI and UDOM have an on-going partnership with plans for student exchanges and collaborative research.

The WADA project is based on GWI’s Water for Rural Development Model (W4RD) to address the water access crisis abroad and in the U.S. Currently, the team is working closely with the Navajo Nation to implement the model in a project called Alliance for Navajo Sustainability. W4RD includes a clean source of water using renewable energy, improved sanitation at clinics and schools, and a direct linkage to economic activities such as agriculture, aquaponics or micro-manufacturing.